Amongst the patients now swimming at a local canine hydrotherapy centre is a cat called Elf – appropriate for the season! West Wales Canine Hydrotherapy is a swimming pool near Carmarthen that helps to rehabilitate dogs following injury or surgery, and assists in maintaining mobility in dogs with degenerative conditions. Elf had surgery on his left hind leg due to a painful and debilitating condition in his hip joint. The top of his thigh bone was removed - a femoral head and neck excision. Eight weeks of cage rest followed, resulting in muscle wastage and a deterioration in general fitness. Jessica Evans and Ryan Saunders, Elf’s owners, were so impressed with the progress made by two of their dogs treated at the centre, they asked if Elf could come along too. Katharine Deane, Registered Canine Hydrotherapist, and owner of West Wales Canine Hydrotherapy said, "I was keen to swim Elf, as all my patients up until now have been dogs. I have treated large dogs from Mastiffs and Great Danes, down to a teacup Yorkie, and a Papillion, with everything in between, but this is my first cat. Most dogs take to swimming quickly and the therapy soon becomes a game, allowing me to stay close to them during treatment, but the technique for swimming a cat is quite different. I have to watch that Elf’s swimming is not upset by his claws catching on his lifejacket, or me." Elf is less like other cats; he was hand reared from a few days old after being abandoned and has lived inside with dogs all his life – so Elf thinks he is a dog! Elf has been swimming twice weekly for the last couple of months to help him rebuild his muscles and improve his general fitness. 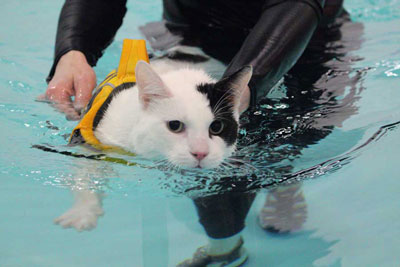 Hydrotherapist Katharine said "Elf has increased the circumference around his left thigh by 15 mm, which doesn't sound much, but for a little cat, it is huge!" "After just a few visits we noticed that Elf wasn't limping, and was generally happier in himself.” said Jessica. Ryan said, "He's been jumping up on top of the side board and knocking all the pictures over! He couldn't jump that high until now. He's really energetic at home, running around all the time, getting into mischief.” Some of the dogs who visit West Wales Canine Hydrotherapy are like Elf; they are recovering from surgery, and need to build up wasted muscles. Vets often prescribe hydrotherapy for dogs with a weakness in their limbs or their back, which strengthens the supporting muscles. Swimming is a non-weight bearing exercise, so for older dogs getting stiff and sore, it helps to keep their joints supple and muscles strong, prolonging an active life. Owners who can't exercise their dog enough bring them swimming to give their pet another outlet for their energy - particularly during these long dark winter evenings. Some dogs have no health problems, and just love to swim. West Wales Canine Hydrotherapy is situated in a beautiful converted church in Peniel, just north of Carmarthen. It has been open for 18 months, and in that time has treated over a hundred dogs - and now one cat! Fully insured and a member of the National Association of Registered Canine Hydrotherapists, the centre has one of the largest canine hydrotherapy pools in the UK. At 8m x 4m it is the ideal size to allow a varied range of therapeutic exercises to be accomplished in a natural way, motivating dogs at their own pace using toys and praise. 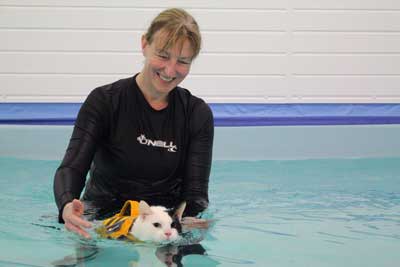 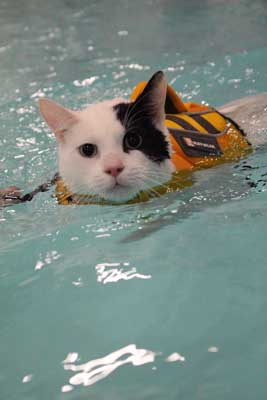 Dogs have been making quite a splash in Peniel recently thanks to the opening of a special swimming pool. West Wales Canine Hydrotherapy has a pool that helps to rehabilitate canines following injury or surgery and aims to assist with mobility in dogs who suffer from degenerative diseases. One such dog that has benefitted from the service is Carlisle, an 18-month-old female who was at the Many Tears Animal Rescue in Cefneithin. Carlisle was heavily pregnant and had an untreated dislocated knee which meant she could barely walk. She underwent specialist knee surgery after she had given birth to her puppies, but months of enforced immobility resulted in her muscles wasting away and a reduction in her general fitness. West Wales Canine Hydrotherapy offered intensive hydrotherapy sessions free of charge, in an attempt to address these issues, and as a result Carlisle has been enjoying three 30 minute sessions a week for the past two months. “With careful monitoring, and gradually increasing the amount, and type of swimming, Carlisle has gained 5 ˝ cm around the circumference of her left hip”, said Canine Hydrotherapist Katharine Deane, who runs West Wales Canine Hydrotherapy. 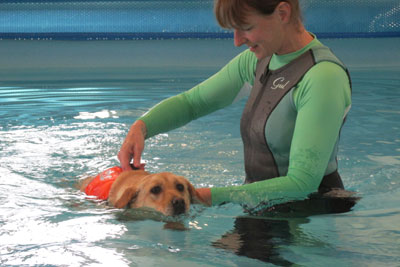 “When we started, Carlisle was noticeably stiff and tired after sessions, but within a few visits, she became more able and energetic. She now uses all 4 legs, with no lameness, and she has normal range of movement in her limbs. Her overall fitness had improved, and her confidence and speed when swimming are just great to see.” Joelle Hoggan, who fostered Carlisle for Many Tears Animal Rescue, said “Having these free sessions has made all the difference to Carlisle’s quality of life. Before, she could only walk about six steps before sitting down, and now she can run and play like any normal dog. It’s been a lifesaver.” West Wales Canine Hydrotherapy, which is fully insured and is a member of the National Association of Registered Canine Hydrotherapists, is based in a beautiful converted church in Peniel, just north of Carmarthen. The swimming pool is 8m x 4m, one of the largest canine hydrotherapy pools in the UK, and is the perfect size to allow a varied range of therapeutic exercises to be accomplished in a natural way, motivating dogs at their own pace using toys and praise. For more information available on the services they provide, you can visit www.wwch.co.uk. 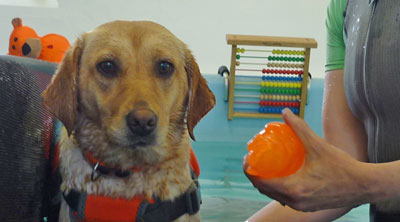